γ-secretase is an intramembrane protease sub-assembly that sunders transmembrane proteins. It is involved in intramembrane proteolysis and also contributes to the regeneration of transmembrane protein. The amyloid precursor proteins (APPs) are typical γ-secretase substrates. These proteins are cleaved to produce 36-43 amyloid-beta (Aβ) amino acid peptides. Abnormal folding of these proteins fragments leads to amyloid plaques, which are frequently encountered in Alzheimer’s disease. Some Type I class of integral membrane proteins is processed under the influence of γ-secretase, such as receptor tyrosine-protein kinase erbB4 and CD44 glycoprotein. γ-Secretase is being explored in several diseases as a clinical goal. Both γ-secretase inhibitors (GSIs) and γ-secretase modulators (GSMs) are being evaluated for this purpose. A large amount of γ-secretase inhibitors (GSIs) from peptide to non-peptide have been disclosed, offering several lead compounds for the design and optimization of γ-secretase targets, but most GSIs lack sufficient potency, exhibit low penetration in the brain, and manifest low selectiveness. γ-secretase inhibitors are obliquely a regulator of a γ-secretase substrate Notch, and valuable in the development of β-amyloid peptide (Aβ). These γ-secretase inhibitors block the Notch signaling pathway in autoimmune and lymphoproliferative disorders, like autoimmune lymphoproliferative syndrome (ALPS) and systemic lupus erythematosus (SLE), and perhaps even in cancerous cell proliferation, angiogenesis, and cellular differentiation of human-induced pluripotent stem cells (hiPSC). The current review portrays the mechanism, regulation, and inhibition of γ-secretase in the management of a wide assortment of diseases. 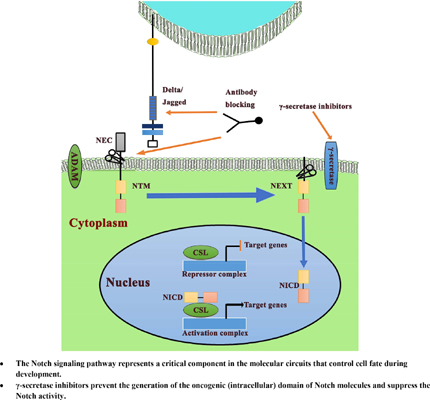