In India as well as globally, diabetes is in a state of high risk and next to cardiovascular disease. As per the WHO, the risk of diabetes is expected to rise about 511 million by 2030. In quest of novel targets for type-2 diabetes, many targets were elucidated, such as Glycogen Synthase Kinase-3 (GSK-3), Dipeptidyl Peptidase (DPP-IV), PPAR-γ, α-Glucosidase, α-Amylase, GLP-1, and SGLT. Among the targets, GSK-3 was reported to be an effective target for the treatment of diabetes. In the metabolism of glycogen, GSK is a regulatory enzyme for the biosynthesis of glycogen (glycogenesis). It catalyzes the synthesis of a linear unbranched molecule with 1,4-α-glycosidic linkages. GSK-3 family has two isoenzymes, namely α and β, which differ in their Nand C- terminal sequences and are semi-conservative multifunctional serine/threonine kinase enzymes. In this chapter, we discuss an overview of general diabetic mechanisms and how GSK-3 modulation may influence these processes. Mutation in the GSK-3 complex causes diabetes. Synthetic and natural scaffolds modulate GSK-3 against diabetes and leading to its optimization for the development of GSK-3 inhibitors. This review mainly focuses on the development of GSK-3 inhibitors and highlights current and potential future therapeutic approaches that support the notion of targeting glucose metabolism with novel antidiabetic agents. 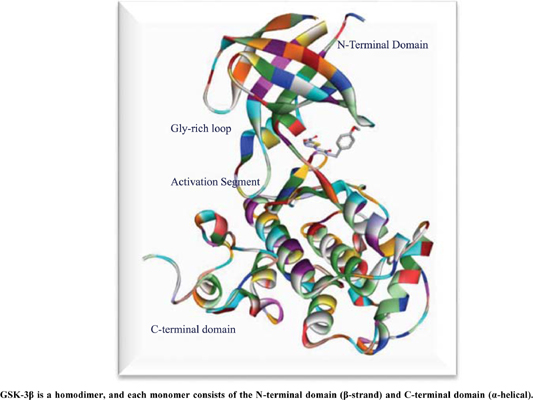