Background: Glycogen synthase kinase 3 (GSK-3) is a serine/threonine kinase enzyme that controls neuronal functions such as neurite outgrowth, synapse formation, neurotransmission, and neurogenesis. The enzyme has two subunits as GSK-3α and GSK-3β. 4ACC, 1Q3D, 3AFG, 1UV5, and 1Q5K are the important GSK-3 receptors isolated from Homo sapiens and Mus musculus. This enzyme mainly phosphorylates Tau protein with the increased amount in neuronal fibres together with beta-amyloid plaques that cause neuronal diseases like Alzheimer's, Parkinson’s and many more.

Objective: We investigated the developments of various synthetic GSK-3 inhibitors responsible for the prevention and treatment of neurological disorders, like Alzheimer's disease, bipolar disorders, acting as antidepressants, neuroprotective, etc.

Results and Conclusion: It has been observed that structures of the GSK-3 inhibitors are comprised of benzopyridine, benzothiazole, pyrazole, pyrazine, dioxolo-benzoxazine, oxadiazole, and benzimidazole in the skeletal with cyclopropyl amide, phenyl carbamothioate, 3-[(propan- 2-yl)oxy]propan-1-amine in the side chain. The molecules were evaluated against the effectivity of GSK-3, human adenosine kinase, cyclin-dependent kinase, and phosphodiesterase-4 along with tail suspension test forced swim test, percent neuronal survival and other cognitive behaviours. The observations confirmed the remarkable effects of the synthesized molecules to conquer Alzheimer, Parkinson’s depression, psychosis and other forms of neurological disorders. 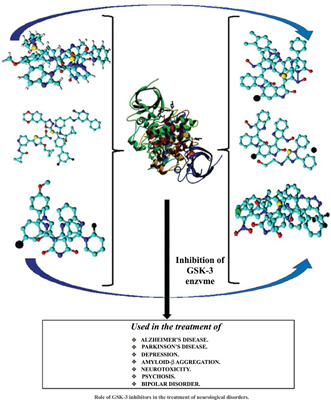