Alzheimer’s disease (AD), a chronic neurodegenerative disease, is the most common form of dementia that causes cognitive function impairment, including memory, thinking, and behavioral changes that ultimately lead to death. The overactivation of GSK-3, an enzyme from the proline/serine Ki NS family, has been associated with hyper-phosphorylation of tau proteins. The self- -assembly of hyper-phosphorylated tau proteins to form tangles of straight and helical filaments is known to be involved in AD. Therefore, GSK-3 has been considered a potential target of novel drug discovery for AD treatment. Research on the development of GSK-3 inhibitors has received enormous attention from the vast scientific community because they are targeted for AD and other diseases, including type 2 diabetes, cancers, stroke, Parkinson’s disease and bipolar disorder. Various drugs of both synthetic and natural origins have been designed to inhibit GSK-3 activity. However, there is a need to develop novel drug candidates that can selectively inhibit GSK-3. Hence, this review summarizes the potential of GSK-3 inhibitors for AD therapy and discusses the structure- activity relationship of current drug molecules and the potential problems associated with them. 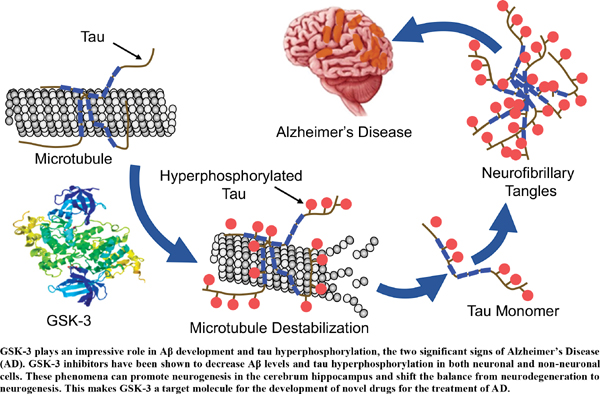