Severe acute respiratory syndrome coronavirus-2 (SARS-CoV-2) has spread worldwide and caused widespread devastation. In the absence of definitive therapy, symptomatic management remains the standard of care. Repurposing of many existing drugs, including several anti-viral drugs, is being attempted to tackle the COVID-19 pandemic. However, most of them have failed to show significant benefit in clinical trials. An attractive approach may be to target host proteases involved in SARS-CoV-2 pathogenesis. The priming of the spike (S) protein of the virus by proteolytic cleavage by the transmembrane serine protease-2 (TMPRSS2) is necessary for the fusion of the virus to the host cell after it binds to its receptor angiotensin converting enzyme-2 (ACE2). There are other proteases with varying spatiotemporal locations that may be important for viral entry and subsequent replication inside the cells, and these include trypsin, furin and cathepsins. In this report, we have discussed the tentative therapeutic role of inhibitors of TMPRSS2, cathepsin, trypsin, furin, plasmin, factor X and elastase in infection caused by SARS-CoV-2. Both available evidence, as well as hypotheses, are discussed, with emphasis on drugs which are approved for other indications such as bromhexine, ammonium chloride, nafamostat, camostat, tranexamic acid, epsilon amino-caproic acid, chloroquine, ulinastatin, aprotinin and anticoagulant drugs. Simultaneously, novel compounds being tested and problems with using these agents are also discussed. 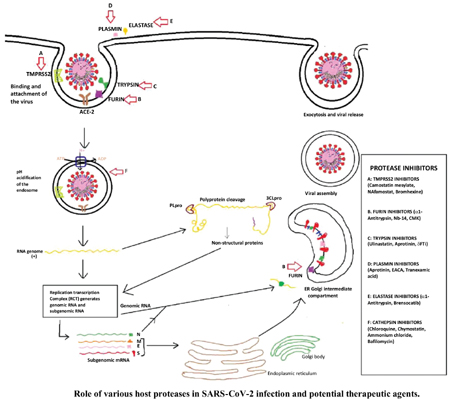