Defects in brain functions associated with aging and neurodegenerative diseases benefit insignificantly from existing options, suggesting that there is a lack of understanding of pathological mechanisms. Alzheimer’s disease (AD) is such a nearly untreatable, allied to age neurological deterioration for which only the symptomatic cure is available and the agents able to mould progression of the disease, is still far away. The altered expression of phosphodiesterases (PDE) and deregulated cyclic nucleotide signaling in AD has provoked a new thought of targeting cyclic nucleotide signaling in AD. Targeting cyclic nucleotides as an intracellular messenger seems to be a viable approach for certain biological processes in the brain and controlling substantial. Whereas, the synthesis, execution, and/or degradation of cyclic nucleotides has been closely linked to cognitive deficits. In relation to cognition, the cyclic nucleotides (cAMP and cGMP) have an imperative execution in different phases of memory, including gene transcription, neurogenesis, neuronal circuitry, synaptic plasticity and neuronal survival, etc. AD is witnessed by impairments of these basic processes underlying cognition, suggesting a crucial role of cAMP/cGMP signaling in AD populations. Phosphodiesterase inhibitors are the exclusive set of enzymes to facilitate hydrolysis and degradation of cAMP and cGMP thereby, maintains their optimum levels initiating it as an interesting target to explore. The present work reviews a neuroprotective and substantial influence of PDE inhibition on physiological status, pathological progression and neurobiological markers of AD in consonance with the intensities of cAMP and cGMP. 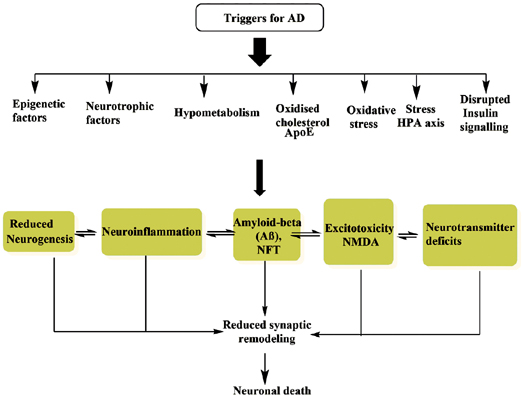