micro (mi)-RNAs are vital regulators of multiple processes including insulin signaling pathways and glucose metabolism. Pancreatic β-cells function is dependent on some miRNAs and their target mRNA, which together form a complex regulative network. Several miRNAs are known to be directly involved in β-cells functions such as insulin expression and secretion. These small RNAs may also play significant roles in the fate of β-cells such as proliferation, differentiation, survival and apoptosis. Among the miRNAs, miR-7, miR-9, miR-375, miR-130 and miR-124 are of particular interest due to being highly expressed in these cells. Under diabetic conditions, although no specific miRNA profile has been noticed, the expression of some miRNAs and their target mRNAs are altered by posttranscriptional mechanisms, exerting diverse signs in the pathobiology of various diabetic complications. The aim of this review article is to discuss miRNAs involved in the process of stem cells differentiation into β-cells, resulting in enhanced β-cell functions with respect to diabetic disorders. This paper will also look into the impact of miRNA expression patterns on in vitro proliferation and differentiation of β-cells. The efficacy of the computational genomics and biochemical analysis to link the changes in miRNA expression profiles of stem cell-derived β-cells to therapeutically relevant outputs will be discussed as well. 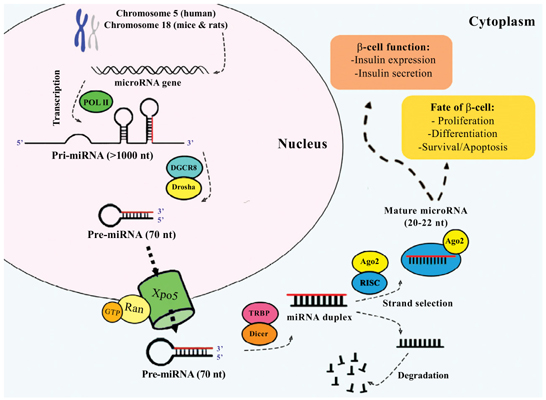