Plasminogen Receptors in Human Malignancies: Effects on Prognosis and Feasibility as Targets for Drug Development


The major proteases that constitute the fibrinolysis system are tightly regulated. Protease inhibitors target plasmin, the protease responsible for fibrin degradation, and the proteases that convert plasminogen into plasmin, including tissue-type plasminogen activator (tPA) and urokinase-type plasminogen activator (uPA). A second mechanism by which fibrinolysis is regulated involves exosite interactions, which localize plasminogen and its activators to fibrin, extracellular matrix (ECM) proteins, and cell surfaces. Once plasmin is generated in association with cell surfaces, it may cleave transmembrane proteins, activate growth factors, release growth factors from ECM proteins, remodel ECM, activate metalloproteases, and trigger cell-signaling by cleaving receptors in the Proteaseactivated Receptor (PAR) family. These processes are all implicated in cancer. It is thus not surprising that a family of structurally diverse but functionally similar cell-surface proteins, called Plasminogen Receptors (PlgRs), which increase the catalytic efficiency of plasminogen activation, have received attention for their possible function in cancer and as targets for anticancer drug development. In this review, we consider four previously described PlgRs, including: α-enolase, annexin-A2, Plg-RKT, and cytokeratin-8, in human cancer. To compare the PlgRs, we mined transcriptome profiling data from The Cancer Genome Atlas (TCGA) and searched for correlations between PlgR expression and patient survival. In glioma, the expression of specific PlgRs correlates with tumor grade. In a number of malignancies, including glioblastoma and liver cancer, increased expression of α-enolase or annexin-A2 is associated with an unfavorable prognosis. Whether these correlations reflect the function of PlgRs as receptors for plasminogen or other activities is discussed. 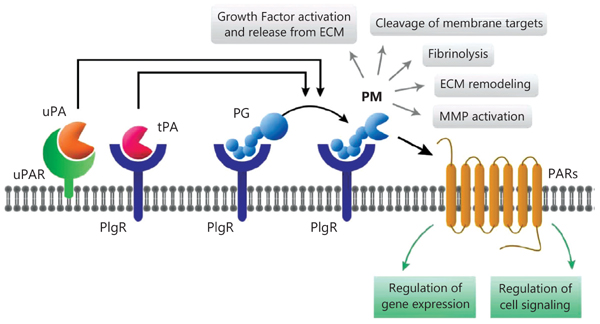