PI3K/ Akt/ mTOR Pathway as a Therapeutic Target for Colorectal Cancer: A Review of Preclinical and Clinical Evidence


Background: Phosphoinositide 3-kinase (PI3Ks) is a member of intracellular lipid kinases and involved in the regulation of cellular proliferation, differentiation and survival. Overexpression of the PI3K/Akt/mTOR signalling has been reported in various forms of cancers, especially in colorectal cancers (CRC). Due to their significant roles in the initiation and progression events of colorectal cancer, they are recognized as a striking therapeutic target.

Objective: The present review is aimed to provide a detailed outline on the role of PI3K/Akt/mTOR pathway in the initiation and progression events of colorectal cancers as well as its function in drug resistance. Further, the role of PI3K/Akt/mTOR inhibitors alone and in combination with other chemotherapeutic drugs, in alleviating colorectal cancer is also discussed. The review contains preclinical and clinical evidence as well as patent literature of the pathway inhibitors which are natural and synthetic in origin.

Methods: The data were obtained from PubMed/Medline databases, Scopus and Google patent literature.

Results: PI3K/Akt/mTOR signalling is an important event in colorectal carcinogenesis. In addition, it plays significant roles in acquiring drug resistance as well as metastatic initiation events of CRCs. Several small molecules of natural and synthetic origin have been found to be potent inhibitors of CRCs by effectively downregulating the pathway. Data from various clinical studies also support these pathway inhibitors and several among them are patented.

Conclusion: Inhibitors of the PI3K/mTOR pathway have been successful for the treatment of primary and metastatic colorectal cancers, rendering the pathway as a promising clinical cancer therapeutic target. 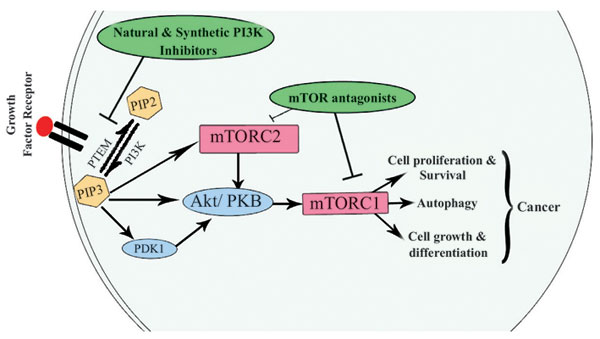