American Trypanosomiasis, a parasitic infection commonly named Chagas disease, affects millions of people all over Latin American countries. Presently, the World Health Organization (WHO) predicts that the number of international infected individuals extends to 7 to 8 million, assuming that more than 10,000 deaths occur annually. The transmission of the etiologic agent, Trypanosoma cruzi, through people migrating to non-endemic world nations makes it an emergent disease. The best promising targets for trypanocidal drugs may be classified into three main groups: Group I includes the main molecular targets that are considered among specific enzymes involved in the essential processes for parasite survival, principally Cruzipain, the major antigenic parasite cysteine proteinase. Group II involves biological pathways and their key specific enzymes, such as Sterol biosynthesis pathway, among others, specific antioxidant defense mechanisms, and bioenergetics ones. Group III includes the atypical organelles /structures present in the parasite relevant clinical forms, which are absent or considerably different from those present in mammals and biological processes related to them. These can be considered potential targets to develop drugs with extra effectiveness and fewer secondary effects than the currently used therapeutics. An improved distinction between the host and the parasite targets will help fight against this neglected disease. 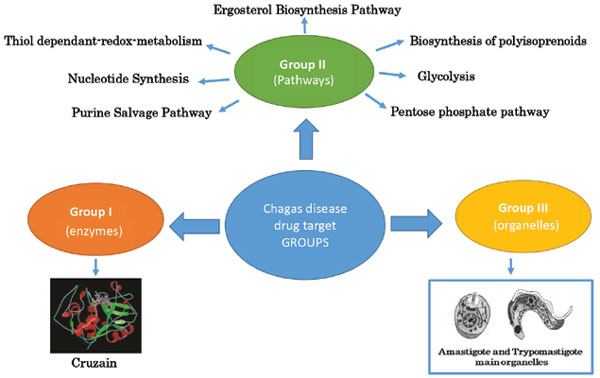