p53 as the Focus of Gene Therapy: Past, Present and Future


Background: Several gene deviations can be responsible for triggering oncogenic processes. However, mutations in tumour suppressor genes are usually more associated to malignant diseases, with p53 being one of the most affected and studied element. p53 is implicated in a number of known cellular functions, including DNA damage repair, cell cycle arrest in G1/S and G2/M and apoptosis, being an interesting target for cancer treatment.

Objective: Considering these facts, the development of gene therapy approaches focused on p53 expression and regulation seems to be a promising strategy for cancer therapy.

Results: Several studies have shown that transfection of cancer cells with wild-type p53 expressing plasmids could directly drive cells into apoptosis and/or growth arrest, suggesting that a gene therapy approach for cancer treatment can be based on the re-establishment of the normal p53 expression levels and function. Up until now, several clinical research studies using viral and non-viral vectors delivering p53 genes, isolated or combined with other therapeutic agents, have been accomplished and there are already in the market, therapies based on the use of this gene.

Conclusion: This review summarizes the different methods used to deliver and/or target the p53 as well as the main results of therapeutic effect obtained with the different strategies applied. Finally, the ongoing approaches are described, also focusing on the combinatorial therapeutics to show increased therapeutic potential of combining gene therapy vectors with chemo or radiotherapy. 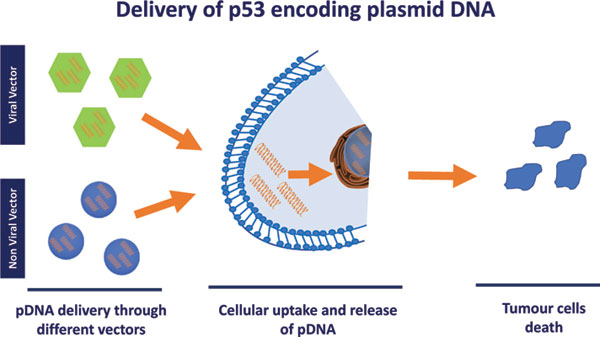